In March of 2015, I went to El Salvador with a group of 18 other missionaries from Rock City. We served at the CDI and also by helping to paint the exterior of the San Salvador church. On Friday afternoon, we had a party with all the kids at the CDI and each one received a brand new pair of shoes. At the beach on Saturday, God showed up in big ways when three members of the Rock City team were baptized in the ocean! You can view a more detailed summary of the week here.

The whole team with Pastor Victor at church on Sunday. 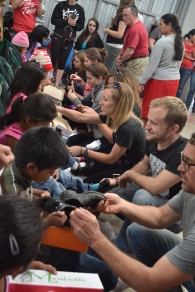 On Friday, Rock City threw a party for the kids at the CDI and each one of them received a new pair of shoes!

Clara and me after trying on her new shoes!

Olivia and Doug hanging out with one of the girls at the center.

With Vladi and Andrea, two members of the youth group that serve as translators.

With Meli and Irene, two members of the youth group that serve as translators.

Josh and Tyler painting on the roof at the San Salvador church.

Relaxing at lunch on our day painting at the San Salvador church.

Maddy and me at the crater after the CDI one day. 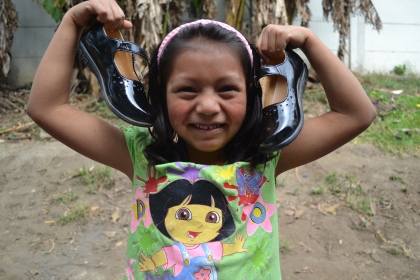 Clara showing off her new kicks!

God was so good to us on Saturday at the beach. THREE members of the Rock City team decided to obey God’s command and be baptized!

Playing games with the children at the CDI.

Playing games with the children at the CDI.